Realme 5i Specification -Price in India 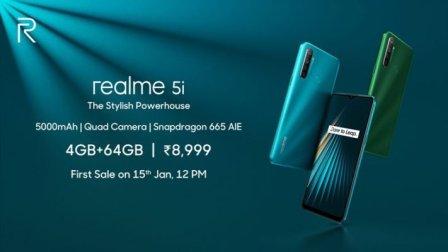 Specification of Realme 5i in India-Price in India

Specification of Realme 5i in India , it comes with a quad rear camera and a 5,000mAh battery with 10W charging support. The Realme smartphone comes with a waterdrop-style display notch and It has a fingerprint sensor at the back. It also has a splash resistance. Realme aims to take this phone like Redmi Note 8 and Samsung Galaxy M20 in India. In addition to the Realme 5i, Realme has announced its Classic Blue Limited Collection that includes a 10,000mAh Realme Power Bank and Realme Buds Air case which is blue in color. The company has also have included anticipated fitness-tracking wristband that is known as the Realme Fitness Band in India.

Full specification of Realme 5i in India

Realme 5i runs Android 9 Pie with ColorOS 6.0.1 on top and features a 6.52-inch HD+ (720×1600 pixels) in-cell display with an aspected ratio of 20:9 and 269ppi of pixel density. The Calculated phone measurement is 164.4x75x9.3mm and it has weighs 195 grams. The display panel of the phone is protected by a 2.5D curved Corning Gorilla Glass 3 for protection. Realme 5i has the octa-core Qualcomm Snapdragon 665 SoC, paired with 4GB of LPDDR4X RAM. It comes with a dual nano-SIM slot. The Realme 5i has 64GB of onboard storage that is expandable up to 256GB via microSD card.

Camera of Realme 5i in India

For photos and videos, the Realme 5i has provided a quad rear camera setup that has 12-megapixel primary sensor along with an f/1.8 lens. It is assisted by an 8-megapixel sensor that has a wide-angle f/2.25 lens, paired with two 2-megapixel sensors that have f/2.4 portrait and macro lenses on top of the phone. The smartphone also has a LED flash in it. For selfies, there is an 8-megapixel camera sensor at the front along with an f/2.0 lens. The smartphone also has a wide range of pre-loaded features for photos, like Beautyplus, HDR, Portrait, Time-lapse, Slo-mo, NightScape 2.0, and Expert.

Connectivity of Realme 5i in India

It we take a look at connectivity options it includes 4G VoLTE, Wi-Fi, Bluetooth v5.0, GPS/ A-GPS, Micro-USB, and a 3.5mm headphone jack.

Sensors of Realme 5i in India

Sensors on board include an accelerometer, ambient light, gyroscope, and a proximity sensor. Realme 5i also has a rear-mounted fingerprint sensor for biometric authentication.

Realme 5i price in India

Launch offers that come on Realme 5i include the benefits of worth Rs. 7,550 for Jio users as well as a there is 10% SuperCash via MobiKwik. Customers will also receive an additional exchange discount via Cashify.

Do Check out upcoming smartphone- Realme X50 5g specification and price in India.

Soon Aarogya Setu app will be available in Jiophone