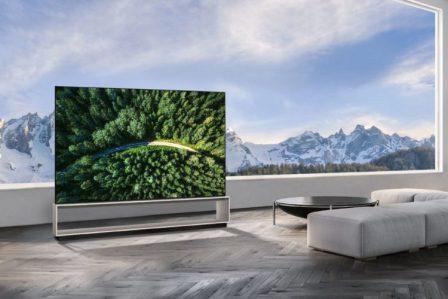 After the announcement made by  Samsung of 8K TVs, it looks like LG has jumped into the 8K world with its lineup of eight 8K televisions. Ahead of CES 2020 and will make the announcement of 8k TVs in a few days. The eight TVs consist of 2 OLED televisions which are 77 and 88-inches  panel size with stunning 8K resolution whereas 6 LCD TVs will have panel size between 65 and 75-inches. The price of both the televisions has not been announced yet but LG has emphasized that its TVs offer ‘Real 8K”. It’s a groundbreaking television with the power to truly transform your daily entertainment into an adventure.

8K resolution is available exclusively on this OLED TV and LG NanoCell TV. The 8K resolution have featured four times more than the most cutting-edge 4K television (7680 x 4320). Delivering colour and clarity are very good of 8K resolution. In fact, the pixels are so tightly structured that it’s impossible to see an individual pixel. Even the images are crisper, clearer and smoother than all other images.

The latest OLED technology delivers deep, rich blacks, vibrant colors, stunning contrast, and incredibly wide viewing angles for images. The images look so much real that you can virtually feel like touching them.

After the announcement of both the companies, it’s clear that there both have a battle. When it comes to 8K TVs and the ‘Real 8K’ LG comment seems like a direct shot at Samsung. Both companies have different ideas about how 8K should be measured. Let just discover features that make 8K TV a masterpiece of design and technology. Just if we briefly explain about the TVs. The resolution of TVs can be around 7680×4320 pixels and both Samsung and LG companies agree that this is the correct resolution. The resolution is on the way between the two tech giants companies. LG currently uses the CTA (Consumer Technology Association) in the definition of 8K. While Samsung used the 8K Associations description of what 8K constitutes of. We might expect the 8K OLED television will look heavy but it’s not heavy. In fact, it’s impossibly slim. It comes with polished rear sides, ultra-slim black bezel, and stylish silver cabinet floor stand, it appears as if it’s floating delicately in your space.
Currently, it isn’t clear which one is the better system but it looks like this war isn’t going to end soon between both companies.

But, moving from the drama, LG’s TVs are built to take advantage of 8K really as its  Lg TVs support HEVC, VP9, and AV1 content natively. LG’s TVs also come with HDMI inputs to handle 60fps content at 8K. The TVs are powered by the new Alpha 9 Generation intelligent processor pro(available only on the LG 8K OLED and NanoCell TVs). It comes with Dolby Vision technology, Dolby Atmos speakers which can upscale the audio to 5.1 surround sound and video to 8K, giving you the best experience that you possibly want. These LG TVs come with Google Assistant built-in, and Alexa built-in can also support Alexa. You can control these TVs with a wide wide range of other compatible smart appliances and devices using just your voice. It also supports HomeKit and AirPlay 2.

Check out Amazon Echo devices now with all its specification.