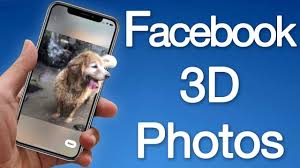 The company has launch this 3D photos feature on Facebook in October 2018, But this feature is only exclusive to phones that had two or more cameras. Those phone users can take portrait mode shots of 3D photos. 3D photos relied on using each camera to take an image that means with a dual camera it will take two separate photos that will be used to create the depth in the photos to give it a 3D look.

But over the last few years, the computer vision team of Facebook has been working on making 3D photos possible with the single-camera without dual-camera input. At last, they succeeded and Facebook has announced good news for all of you that now you will all able to post 3D photos on your timeline from the Facebook app even if you have a phone with a single camera.

Have a look at an animation the company provided of what that depth generation process looks like:

Not only that Facebook has also announced that the front-facing camera will also be able to access the feature on the main Facebook app. So you can also use a selfie camera for posting and making of 3D photos. So now get ready for a lot of 3D selfies and post it on your timelines.

But this feature is limited to some relatively modern single-camera phones like Google’s Pixel series is now supported this feature, and single-camera iPhones from the 7 forward will have access to this feature. But there is a huge diversity of Android devices that will make it hard to say which will phone will support this 3D photo feature and which will not support it.The 3D photos feature on the android phone will depend on a few things not are not usually listed on the specification sheet but once you will update your Facebook app, you can check it and take a picture.