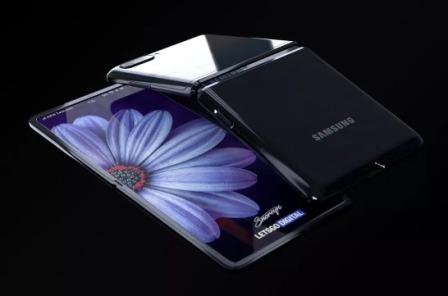 Samsung Galaxy Z Flip Foldable Phone comes with a price of Rs. 1,09,999 in India. It comes with Mirror Black, Mirror Purple, Mirror Gold colour options. You can also avail of this smartphone on pre-order at Samsung India’s online store and even in some select offline retailers of Samsung. Deliveries this new smartphone will be starting from February 26. Even the buyer will get a free cover and AKG headphones inside the box of this upcoming phone.

It runs on Android 10 with a tweaked version of OneUI and features a foldable 6.7-inch full-HD (1080×2636 pixels) Dynamic AMOLED Infinity Flex display with 21.9:9 aspect ratio and 425ppi pixel density. As mentioned, there is a secondary 1.1-inch (112×300 pixels) Super AMOLED display with a 303ppi pixel density. It has a weighs of 183 grams and measures 87.4×73.6×17.33mm when folded, and 167.3×73.6×7.2mm when unfolded. The phone comes to the packs an Infinity Flex Display that bends from the middle of the screen to provide the clamshell form factor to its users. It also has Flex Mode that opens at varied angles and it will also allow a user to use two apps in split-screen mode when the phone is partially bent. The phone also has had a secondary small cover screen for all important notification without opening the phone.

Samsung Galaxy Z Flip Foldable Phone comes with Qualcomm Snapdragon 855+ SoC processor with a 3,300mAh battery. The phone comes with a paired with 8GB RAM whereas internal storage up to 256GB. There is no option for storage expansion which means you can’t use a microSD card on this phone. It also has a dual rear camera setup with a 12-megapixel wide-angle camera (f/1.8, 1.4-micron pixels, 78-degree FoV) and a 12-megapixel ultra-wide-angle camera (f/2.2, 1.12-micron pixels, 123-degree FoV, OIS). The front of the phone support 10-megapixel (f/2.4, 1.22-micron pixels, 80-degree FoV) camera for selfies and video calls. It also has to tout HDR10+ video recording features. The also smartphone has an ability to take selfies by partially folding the Galaxy Z Flip and resting it on a surface, something that cannot be done with traditional phones.

It also supports fast charging and has a single mono speaker. It comes with dual sim(Nano + eSIM) option. If we talk about Connectivity options in the Smartphone. It also includes Bluetooth v5.0, 4G LTE, USB Type-C, NFC, MST, Wi-Fi 802.11ac and GPS (A-GPS). Last, not the least it has a fingerprint sensor that is situated on the side of the phone. It also has Samsung Pay, Samsung Health, Samsung Knox, and more feature that every Samsung smartphone have.

Samsung has added small nylon fibers on the edges of the hinge to repel dust, and the hinge is rated to open and close 200,000 times so you don’t have to worry about anything which Samsung Galaxy Z Flip Foldable smartphone.