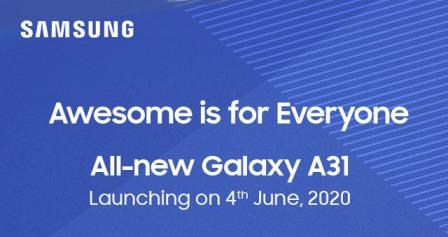 Samsung Galaxy A31 is now going to launch on 4 June 2020 with an expected price of Rs. 14990. It is confirm by the South Korean giant. The phone faces some delay in launching because of the lockdown that the world is facing but now it is sure that the Smartphone is going to launch on 4 June. As it has been listed on the Samsung India website with notify me button, with its complete design, and key specifications.

Samsung Galaxy A31 is going to introduced globally in March 2020. It comes with an AMOLED display, quad-camera setup and a massive 5,000mAh battery. But now let’s move on and check the prices, features and specification in India

Full specification and price of Samsung Galaxy A31 in India

The upcoming smartphone comes with a 6.40-inch touchscreen full HD+ AMOLED display with 2,400 X 1,080 pixels resolution and a waterdrop notch for the selfie camera. The aspect ratio of the Galaxy A31 phone is 20:9. If we talk about the measures 159.30 x 73.10 x 8.60mm (height x width x thickness) and the weighs of this Samsung Galaxy A31 is 185.00 grams. The phones come with 2GHz octa-core MediaTek Helio P65 processor that features 2 cores clocked at 2GHz and 6 cores clocked at 1.7GHz.

The Samsung Galaxy A31 runs Android 10 OS with One UI 2.0 custom skin on top of the phone. It also comes with a powerful 5000mAh battery which is non-removable. The phone also gives you the power to stream, share and game on. It has 4GB RAM that delivers smooth and efficient performance and 128GB storage that is further expandable via microSD card(up to 512GB). The smartphone supports proprietary 15W fast-charging as well.

The Samsung Galaxy A31 comes with a dual-SIM (GSM and GSM) that accepts both Nano-SIM cards. The phone also comes with a Game Booster to Maximize your performance, Cut distractions and up your game with a dedicated interface and easy-to-reach menu. It also learns your usage patterns to optimize battery temperature and memory.

Samsung Galaxy A31 in India comes with Samsung Knox which will protect your phone from the minute it’s turned on. It also offers multi-layered security, it protects your most sensitive information from malware and malicious threats.

It also has Samsung Members app that makes easy for you to tune up the performance of your devices. While Samsung helpline also supports you lets you troubleshoot problems when you need the extra assistance for this.

Price of Samsung Galaxy A31 in India

If we talk about the expected price of the Samsung Galaxy A31 in India is Rs. 20999. The smartphone is going to launch in 4 GB RAM / 64 GB internal storage base variant. It is expected to available in Prism Crush Black, Prism Crush Blue, Prism Crush Red, Prism Crush White colour.

5 thoughts on “Samsung Galaxy A31 Price in India-Full specification”